Wish of a Lifetime

Edward K., 88, of Kennesaw, Georgia, has been a lifelong lover of adventure! Since the beginning of his career jumping out of airplanes in the military, to traveling across the United States on his Harley, to hang gliding with friends, Edward has always been young at heart. After Edwards time in the military he discovered his passion for machinery and cars, which led him to his career as an auto mechanic for over 50 years. Although Edward had never learned to read or write he had a photographic memory when it came to putting together and taking an engine apart.


Throughout Edwards life he maintained his love for skydiving though was unable to continue doing it as his priorities shifted to focusing on his family. He cared for 7 children and was married 3 times. As Edward got older he experienced tremendous loss both physically and emotionally. Two of Edwards wives passed away due to a car accident and a heart attack, leaving Edward alone. In his old age, Edward still dreamed of revisiting his youth by going skydiving one last time. One of the things he was most proud of was a list of entries from every jump he ever did. Donna, Ed's daughter, and nominator shared with us that when "You look at my dad, his body is frail, but you look at his face and you see he is full of life. There is no way he is 88 years old. You get to catch a glimpse of what I've seen all my life".

Although Edward is on hospice, Wish of a Lifetime and GHC Housing were so incredibly excited to be able to send him skydiving one last time on June 22nd. When we followed up with Ed's daughter after the wish was granted, she said, "I think this made him feel young again. It brought him back to life. Since this wish he's gotten his spark back and is adventurous again. He's started doing more things around his home and I think he has realized that even though he is 88, he's not dead yet! We can't thank you guys enough for doing this for him. It is so great to know that there are people out there who still do things out of the goodness of their hearts."


The video of Edward skydiving is located here https://www.cnn.com/videos/us/2019/07/04/korean-war-veteran-88-skydives-edward-kuhns-christi-paul-ndwknd-vpx.cnn 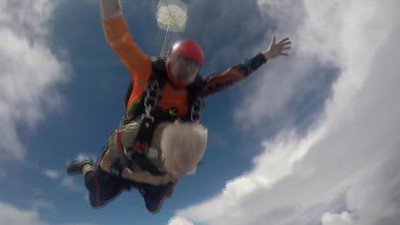